A three judge court in Peru has ruled that the COVID-19 pandemic was started by the billionaires Bill Gates, George Soros and Rockefeller. Despite the ruling (read the resolution in full below), “fact-checkers” concluded that the Peruvian court had no evidence to make such a judgement citing declaration from the WHO and CDC who have lost all its credibility. 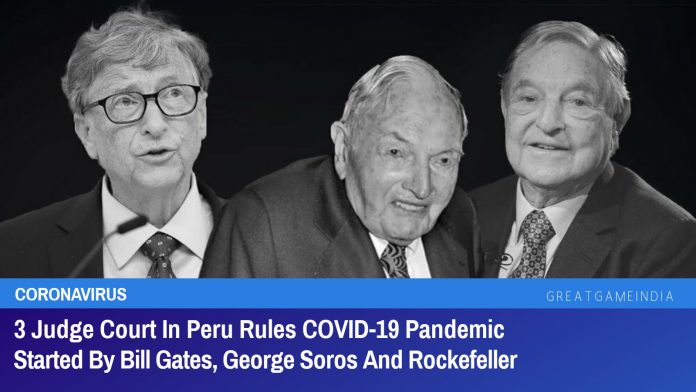 On December 21, 2020, a three judge Peruvian court declared that the coronavirus pandemic was started by billionares Bill Gates, George Soros and Rockefeller, ironically known as the Good Club – who want to save the world.

The resolution maintains that the criminal process was stopped because of the covid-19, so that it had an “unpredictable” nature, except for its creators “who handled it and continue to direct it with extreme secrecy within their environments and world corporations, with projections to the 2030 project. 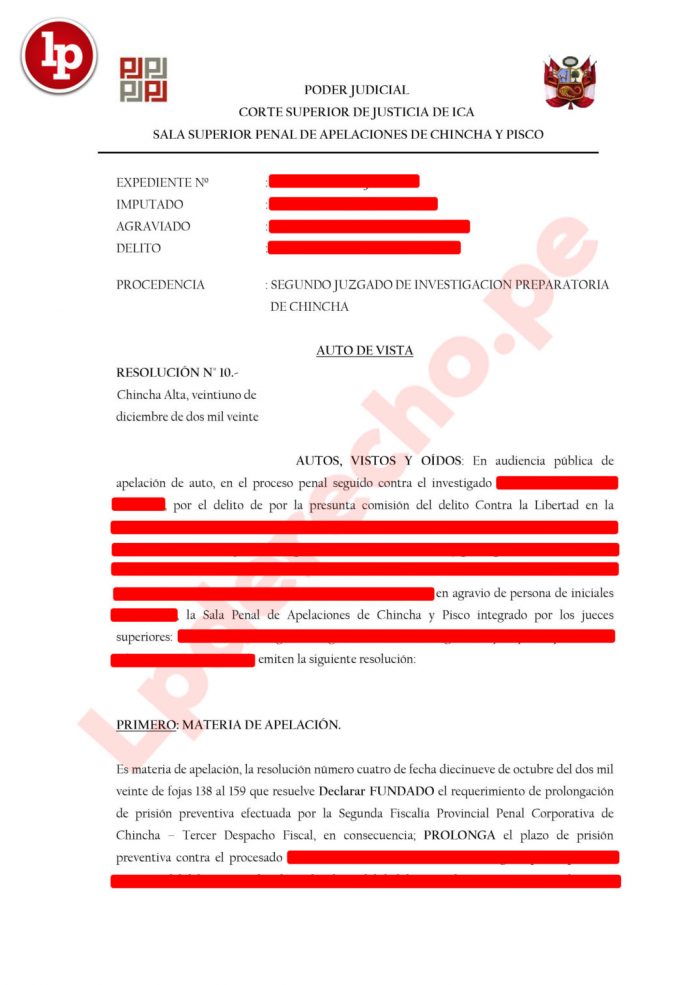 c) .- The Plenary Agreement 01-2017 in its 18th foundation states: “… an extension of the preventive detention cannot be accepted if the criminal process was paralyzed without any cause of justification that legitimizes it …”

In the sub judice case, the criminal process was paralyzed due to the Covid 19 pandemic, created by the criminal elites, who dominate the world; and that it paralyzed the activities in almost all the countries of the globe, and nobody imagined its advent and its continuation in the future. 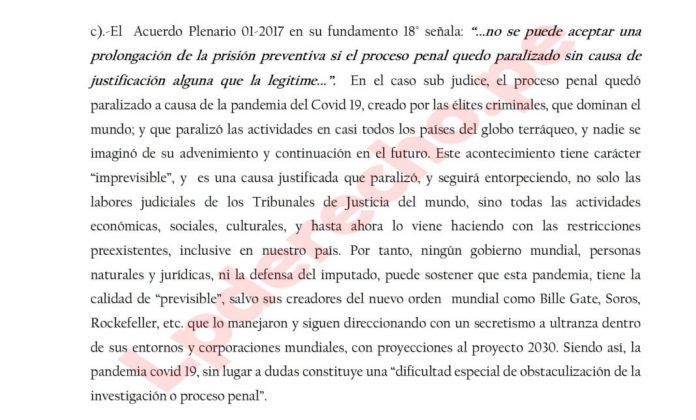 This event has an “unpredictable” nature, and is a justified cause that paralyzed, and will continue to hinder, not only the judicial work of the world’s Courts of Justice, but also all economic, social and cultural activities, and so far it has been doing so with pre-existing restrictions, including in our country.
Subscribe to GGI via Email

Enter your email address to subscribe to GreatGameIndia and receive notifications of new posts by email.

Therefore, no world government, natural and legal persons, or the defendant’s defense, can maintain that this pandemic has the quality of “predictable”, except for its creators of the new world order like Bill Gates, Soros, Rockefeller, etc. that handled it and continue to direct it with extreme secrecy within their environments and global corporations, with projections for the 2030 project.

This being the case, the covid 19 pandemic undoubtedly constitutes a “special difficulty in hindering the investigation or criminal process ”.

What is not mentioned in the ruling is that the Rockefeller Foundation and the Clinton Foundation have developed a series of COVID apps which will tightly control your post-covid life. The initiative is launched by non-profit trust Commons Project Foundation which is part of the World Economic Forum. The Commons Project include three COVID apps – CommonHealth, COVIDcheck and CommonPass. Together, they will collect, store and monitor your health data based on which the apps will decide whether you are eligible to travel, study, go to office, etc.

The legal news service lpderecho reported on January 11, 2021, that top-level judicial officials in Peru announced they will start an investigation into the statement by the three judges.

Despite the ruling, “fact-checkers” concluded that the Peruvian court had no evidence to make such a judgement citing declaration from the WHO and CDC who have lost all its credibility. What is of interest is that Lead Stories, the Facebook fact-checker is itself funded by the Chinese and goes about debunking articles that point to their their role in the pandemic and giving clean-chits to their backers.

Earlier, an Italian politician had demanded arrest of Bill Gates in Italian Parliament. Sara Cunial, MP for Rome denounced Bill Gates as “Vaccine Criminal” and urged Italian President to hand him over to the International Criminal Court for crimes against humanity.

As reported by GreatGameIndia last year, the President of Belarus had exposed that the World Bank coronavirus aid comes with conditions for imposing extreme lockdown measures, to model their coronavirus response on that of Italy and even changes in the economic policies which he refused as being “unacceptable”.

A major lawsuit has also been filed against the PM of Denmark for strict COVID-19 restrictions and for killing almost 17 million minks.

Just a week back, a German court in a landmark ruling has declared that COVID-19 lockdowns imposed by the government are unconstitutional. Thuringia’s spring lockdown was a “catastrophically wrong political decision with dramatic consequences for almost all areas of people’s lives,” the court said, justifying its decision.

Even the Belgian health experts have demanded an investigation into the WHO for faking a pandemic.

In the past in 2010, the WHO was caught faking a pandemic and was forced to admit that its methodology of measuring the virality or the spread of the disease, instead of its severity was incorrect.

For latest updates on the outbreak check out our Coronavirus Coverage.

Send in your tips and submissions by filling out this form or write to us directly at the email provided. Join us on WhatsApp for more intel and updates.
We need your support to carry on our independent and investigative research based journalism on the Deep State threats facing humanity. Your contribution however small helps us keep afloat. Kindly consider supporting GreatGameIndia.

Did GGI or anyone has not checked my link in comments.
When anything happens in this world why world runs after Tom, Dick and Harry… !

These guys and other representatives and agents of special interests must pass away first, if they really want to contribute to the reduction of the world population.

Isn’t a militaire coup, and temporary military administration in our countries the solution to chase away the present governments who participate in the suppression by the cabal?

At least, the criminality of “deliberate preparation of homicide” by William Gates is evident. Can’t arrest warrant issued and the Interpol catch this evil, or issue an “Wanted” (dead or alive) with a bounty money? The homicide intention by William Gates has been expressed by himself since years. This is not left or right, republicans or democrats, conservatives or progressives, but this is about the good and the evil, about win or die. Don’t let the evil agenda 2020 succeed. India and other large population countries must wage a war on terrorists such as these guys.