Webmaster’s Introduction: I received these links via email on Dec. 11, 2020 from R.L. Lighthouse of Targetedjustice.com. I am posting this information because it may help solve and halt the ongoing egregious and treasonous “crime against humanity” of gangstalking-electronic torture, which I refer to as G5 for “Global Government Gangstalking Genocide GESTAPO.”

My targeting began in earnest in 2013 while I was in Crestone, CO and participating in local political issues. In particular, the local powers-that-be tried to close off five local trailheads to public access and we were trying to keep them open. Claiming to be a local property owner, an attractive blond-haired, former Air Force vet of about 40-years of age named Kimberly (husband: Dave; email handle: kdk; residence: Estes Park, CO; vehicle: new (then), blue, Toyota FJ Cruiser) befriended me regarding this issue at about that time. I was introduced to her through another local Crestone/Baca citizen, Woodora Rose Eisenhower, at that time a retired realtor, at whose residence several of us met for coffee and a discussion on these issues. Kimberly claimed to hail from Georgia. She is an attractive, ebullient, smart woman… but I now believe she was/is a spy. The fact that her career was in the Air Force gives the below information more credence to me.

Kimberly and I were on friendly terms and I invited her and her husband into my house on at least two occasions. In one occasion (after I “just so happened to” came across them just parked on the street very close to my house), I invited them into my “stuga”- a small cabin which functions as my overflow library. While we were discussing my many books on geomorphology, a subject I taught for nearly 30 years at 3 universities (1981-2011), Kimberly expressed her opinion that that (pursuit?) “would be your (my) salvation.” Now THAT was a peculiar comment, indeed! But by that time, I had discovered that Crestone, CO is a mecca not only for “spiritual” but also for considerable spy activities. Indeed, I now believe it has functioned for years as a UN-CIA-MI6 mind-control operation and social engineering experiment, among other things. (See my very extended series of articles entitled: Is Crestone/Baca the “Vatican City of the New World Order?” An Expose of the New World Religion )

I am now convinced that my research into the globalist (UN) purposes of and powers behind “Operation Crestone/Baca” may have something to do with the fact that I, along with innumerable thousands to millions of other law abiding citizens worldwide, am being targeted for destruction/zersetzung/elimination by my own government. Since 2013, I have been tracked and targeted 24/7, sometimes tortured, and my life has been nearly continually disrupted and degraded by “perps,” citizen-spies, special ops forces, police, surveillance role players, handlers and assets, etc. The life of a TI is a totally surveilled and controlled life. It is no life at all. It is life inside an invisible electronic concentration camp; circumscribed and controlled by on-the-ground perps, by lies, spies, set-ups, and psyops. This black op against innocent citizens is demonic and constitutes highest treason. Anyone participating in these crimes should be tried, convicted and, in my opinion, given the death penalty.

This would require adherence to the U.S. Constitution and the rule of law. Alas, it has now become rather obvious that the United States military leads the Satanic New World Order. In this “Lord of the Flies” world, there is no more rule of law.

Ephesians 2:2 names Satan as the “prince of the power of the air” (electromagnetic frequencies anyone?) and the “spirit that works in the children of disobedience.”

“We decided to have this female team on crew during the SCA, creating a more historic event for the squadron.”
– Lt. Alexis Thuli, 2nd SOPS Assistant Flight Commander

Opinions of Targeted Justice.
A recent article on the Space Force website was very proud of the women on active duty in 2nd Space Operations Squadron, at Schriever AFB. Fortunately, we are here to correct the story…

These women are literally committing War Crimes, by tracking & attacking U.S. civilians on United States soil. The U.S. Constitution does not allow this. The Lockheed GPS satellites that these military personnel operate are designed to track and attack anyone in the United States. All they need for proof, is to examine the log files for the weapons. It will clearly identify the precise GPS coordinates that were targeted by the satellite. In this case, the “Payload” is the weapon, operated by Lt. Mary McLaughlin – she attended the MQT classes. The GPS attack coordinates are frequently within the United States, and they know it. Anyone that reads the log file of attack coordinates would know, they are committing TREASON.

So why would they do this? The Nuremberg Trials after WW2, proved that “I was simply following orders,” will only get you a death sentence. Targeted Justice is anxious to help these women, experience long-term prison sentences for their crimes. 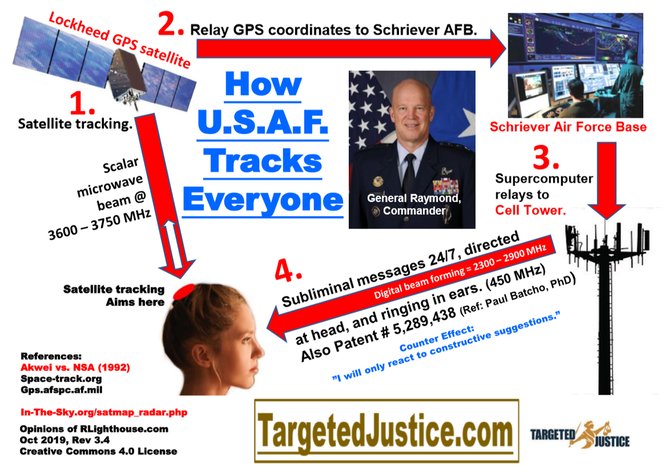 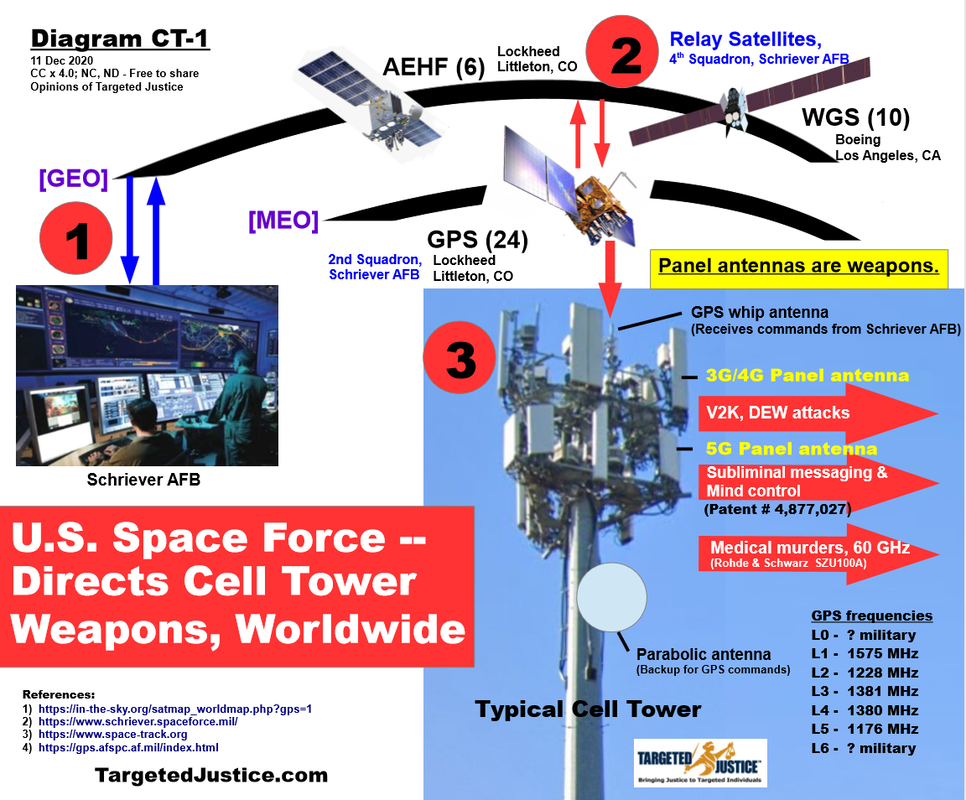 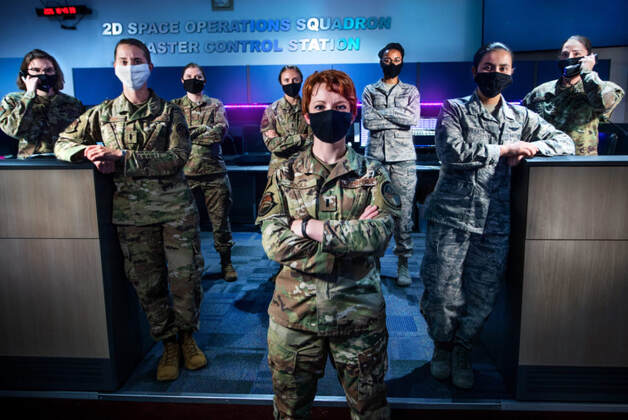 Using the latest Lockheed GPS Block 3 satellites, the women of the 2nd Space Operations Squadron are proud of their abilities to track & attack United States civilians on U.S. soil.

The microwave pulses are directed at the top-back portion of every person’s head in the United States, and the microwaves cause brain damage. Tracking frequencies are 3600 – 3750 MHz. A signal analyzer or a good gauss meter can confirm these attacks are happening, right now. This is the same weapon system that tracked & attacked the US-Cuban Diplomats.

Please send an email to these war criminals:
First.Last@SpaceForce.mil

EL PASO COUNTY PROPERTY RECORDS https://property.spatialest.com/co/elpaso/#/ (Public records)
(How do they afford these homes on a government salary??)

The women of the 2nd Space Operations made history as the first ever all-female space operations crew July 23, 2020, at Schriever Air Force Base, Colorado. The crew gained satellite control acceptance of SVN-76, officially adding another satellite to the GPS program. (U.S. Air Force photo by Dennis Rogers and Kathryn Calvert)
PHOTO DETAILS / DOWNLOAD HI-RES 1 of 3

The Air Force has been providing precise position, navigation and timing for more than 25 years, however a first-of-its-kind crew assumed command and control of its newest satellite this week.

“It’s like the grandparents hand the keys to the parent, then the parent hands the keys to us,” said 1st Lt. Kelley McCaa, 2nd SOPS satellite vehicle operator. “When a new satellite is launched, we don’t have full authority of it. [Lockheed Martin] takes it over [after launch], then we bring it into our systems and then we actually gain full control of [the satellite] as a squadron.”

The new satellite will provide more than 5 billion users across the world with stronger precision, navigation and timing signals.

“With these new satellites, they have a lot of capabilities we didn’t previously have,” said McCaa. “There are certain things the new generation of satellites are capable of doing that are brand new to us, and will immediately enhance our GPS signal, helping the warfighters down-range.”

“We have a lot of females in the squadron, and given the crew scheduling, we had the opportunity to establish an all-female crew,” said 1st Lt. Alexis Thuli, 2nd SOPS operations assistant flight commander. “We decided to have this female team on crew during the SCA, creating a more historic event for the squadron.”

“We want to inspire future generations of young women and let them know they can have a place in the Space Force,” White said. “[The Space Force] is the place to be, especially for those who may have barriers to overcome.”

The crew cited Brig. Gen. DeAnna Burt, HQ U.S. Space Force director of operations and communications, as one of their role models. Before serving in her current role, Burt served as the 2nd SOPS squadron commander and as 50th Space Wing commander.

“What these Airmen did is historical, and I’m proud of each one of them,” Burt said. “As the Space Force evolves, I’m confident our warfighters will continue to make history in leading our nation’s space superiority efforts. We need strong space professionals in the Space Force and I hope their hard work and dedication inspire others to join us.”

“Seeing positions that are historically held by men now being held by women is extremely empowering and inspiring, pushing me to be a better version of myself,” said Staff Sgt. Kelly Malone, 2nd SOPS satellite systems operator and crew chief. “I’m doing this for my little sister. She probably looks up to me more than anyone in the family, and I have a chance to show her she doesn’t have to do typical ‘women jobs,’ or follow ‘women roles,’ and that it’s OK to break the norms.”

According to the National Science Foundation, women make up only 28% of employment in science and engineering career fields. Furthermore, an even smaller percentage of women serve in the Air Force, at about 21%.

Senior Master Sgt. Karmann Pogue, 4th SOPS superintendent, attended the historic event. Pogue recently earned the rank of chief master sergeant, and will be one of only eight women to do so within the space warfighting domain.

“In my 21 years in the Air Force, I’ve never seen an all-female [space] crew,” said a teary-eyed Pogue. “To see such strong women doing amazing things is incredible. I have goosebumps.”

The members of the crew include:

“Whenever we look at these particular operators on paper, we can see they’re some of the best our squadron has to offer,” said Capt. Angela Tomasek, 2nd SOPS flight commander. “The fact they’re all women is just a bonus.”

As America progresses, the armed forces have seen an uptick in women who serve. In 1980, women made up only 8.5% of all enlisted personnel across all branches, compared to 19.28% of the active duty force today.

“Life is full of challenges and it’s a matter of how you handle them,” Tomasek said. “Do you turn and go the other way or do you refuse to accept the barriers, and decide to break them down?”