As part of this technical background, it is useful to briefly look at the enormous scientific advances made by inventor, Nikola Tesla.

Nikola Tesla had 700 patents and was probably the greatest inventor since Leonardo da Vinci.  He invented alternating current (AC) electricity, the “Tesla coil and transformer”, the rotating magnetic field, radio, radar, remote-controlled robots, X-rays, the transistor, the bladeless turbine, and even a beam weapon he termed the “death ray.”  He discovered that “free energy” is available in the “vacuum of space.”  And he discovered how to get electricity from the earth and atmosphere.  He discovered that the earth itself is a giant capacitor and he experimented with transmitting electricity to virtually anywhere around the world.  Tesla envisioned that in the future, humans will harnass clean, abundant, and free energy from space, much like taking water from a well.  Tesla’s Colorado Springs experiments showed that wireless electricity transmission was feasible.  Tesla stated:

Electric power is everywhere, present in unlimited quantities, and can drive the world’s machinery without the need of coal, oil, gas or any other fuel.

At the American Institute of Electrical Engineers meeting in May 18, 1917, Tesla stated:

Ere many generations pass, our machinery will be driven by a power obtainable at any point in the universe… throughout space there is energy….  As to power transmission through the space, it is a project, which I consider absolutely successful for a long time.  Years ago, I could transmit power without wires to any distance without limitation, which was imposed by the physical dimensions of the Earth.  In my system, the distance value is of no importance.  The transmission efficiency can reach 96 or 97 percents, and there are practically no losses, except for the component, which is inevitable for the device operation.  If there is no receiver, there is no power consumption anywhere….. 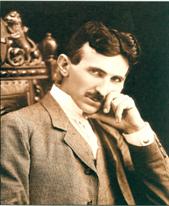 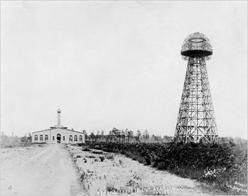 Figure 3.  Nikola Tesla and drawing and photo (below) of his Wardencliffe Tower

Tesla designed and began construction of the Wardenclyffe Tower on Long Island, in New York City in order to carry out this vision of a world system of wireless power and telegraphy transmission that would be able to send pictures, messages, weather warnings, and stock reports throughout the world.  Tesla began construction at Wardencliffe in 1900 with $150,000 capital from financier John Pierpoint Morgan.  The project was to include an 187’-high transmitter topped with a 68’-diameter, doughnut-shaped dome, consisting of a copper electrode.  This was the prototypical “Tesla coil.”  The source of the power was to be the Niagra Falls electrical power plant.  The tower was to transmit this electrical power to the whole globe without wires and would use the ionosphere to bounce the energy back to all points on the surface of the earth.  It would also broadcast communication channels of all radio wavelengths.  The tower complex had a 100’ deep foundation and a square brick building, 100 feet on a side, that was built below it for a power-house and laboratory.  The intent was that high frequency electricity would provide unlimited wireless electricity anywhere in the world, turning the earth itself into a gigantic dynamo.  It would run all of the earth’s industry and transportation.  Tesla also envisioned that this wireless power could be used for inter-planetary communication.

At first, this project was funded by Wall Street financier, J.P. Morgan and Colonel John Jacob Astor.  However, Morgan soon objected to the free nature of the energy, famously stating: “If anyone can draw on the power, where do we put the meter?”  So Morgan stopped funding the project in 1906 just when it seemed that Tesla’s new system was destined to replace the AC system and make free electricity available to all.  Of course, if wireless power generation worked, then the value of Morgan’s power utilities and copper mines would plummet.  This could have wiped out General Electric, which Morgan had founded.

Had Morgan not halted Tesla’s research into free energy, we would probably not be dependent on fossil fuels to run our economy today.  Many now believe that Morgan funded Tesla mainly to control him and protect his energy empire.  In fact, after 1906, Morgan continued to sabotage any future deals that Tesla tried to make with other financiers, by using his influence with those financiers.  The Wardencliffe Tower was demolished in 1917 for “wartime security reasons.”

Astrophysicist Adam Trombly stated that if society had followed up on Tesla’s inventions:

We wouldn’t have a fossil-fuel economy today.  And J.P Morgan, Rockefeller and a number of others wouldn’t have amassed extraordinary fortunes on the basis of the fossil fuel economy…. a more advanced cosmology sees everything as a modification of an energy-rich background field.  Our physical bodies are relatively insignificant modifications of that field.  The field itself has a potential energy equivalence, in grams, of 1094 (10-to-the-94th power) grams per cubic centimeter.  The human body, in comparison, has a gram equivalent of only about one gram per cubic centimeter.  That means that the background energy amounts to 1094 times more energy than our physical bodies. (from Eisen, 2001)

Tesla’s plan was for wireless transmission of free energy that would be freely available to anyone who placed a tuned receiver into the ground while Tesla’s tuned transmitter was resonating frequencies.  The vision utilized the concept of “Earth resonance.”  Tesla discovered the secret of sending out the correct frequency with electrical pulses.  The power could be tuned in, just as we tune in a radio station.  Tesla researchers believe that, had he been able to continue his research, he could have resonated the cavity between the ionosphere and the ground that is now known as the “Schumann cavity.”

Sadly, on the night of March 13,1895, the day the power was turned on from the first (Tesla-invented) AC power generating station in Niagra Falls, Tesla’s lab burned down and all files and apparati were destroyed.  Later that year, German physicist Wilhelm Conrad Roenten made public the first X-rays.  If Tesla had had access to Roenten’s papers, he could have proved that he (Tesla) was the first to take pictures by X-ray.  Also, the Italian Guglielmo Marconi had been hanging around Tesla’s lab before the fire in 1895.  In 1901, Marconi was credited with inventing the radio.  Tesla later stated, “Marconi is a good fellow.  Let him continue.  He is using seventeen of my patents.”  (Eight months after Tesla’s death, the U.S. Supreme Court ruled that Tesla’s radio patents preceded Marconi’s and hence, Tesla invented radio as well).

Desperate to acquire funding to keep his wireless energy transmission project going, Tesla sold his “bladeless turbine” and “death ray” patents to the Germans between WWI and WWII.  He subsequently moved from New York City to Colorado Springs, where he conducted his famous “God of Lightning” experiments.  His massive 52-foot diameter Tesla coils discharged more than 12 million volts at each burst, generating wireless waves that mediated electric energy for many miles. Unfortunately, there is little information on Tesla’s work in the field of wireless power transmission methods available today.

On Jan. 7, 1943, the night before Tesla’s death, he was scheduled to tell President FDR about his free energy.  Official reports indicated Tesla was found dead in his apartment of “natural causes.”   Immediately after his death, his scientific works disappeared from his apartment.  They were never found.  Part of those works included information on the techniques which could be used for wireless power transmission (Strebkov, 2006).  In 1981, at a conference on Non-Conventional Energy, a detective who had investigated the scene stated: “for national security reasons no one was to know that the coroner’s report showed that Tesla was poisoned.”

After Tesla’s death, the public was told his papers were shipped back to Yugoslavia, and that U.S authorities (Custodian of Alien Property) had dealt with his belongings.  So it appears that U.S. government agents had the first crack at his safe and other papers.   Biographer Margaret Cheney determined that the U.S. military took possession of Tesla’s papers from the Office of Alien Properties.  The trail led to the Wright-Patterson Air Force Base in Ohio.  In response to a Freedom of Information Act request of 1980, Wright-Patterson base stated: “We concluded that the documents were destroyed at the time the laboratory was de-activated.”

Electrical energy can be economically transmitted without wires to any terrestrial distance… Wireless transmission of electricity has tremendous merits like high transmission integrity and Low Loss (90-97% efficient) and can be transmitted to anywhere in the globe and eliminate the need for an inefficient, costly, and capital intensive grid of cables, towers, and substations.  The system would reduce the cost of electrical energy used by the consumer and get rid of the landscape of wires, cables and transmission towers.

The bottom line is that others have verified and capitalized upon Nicola Tesla scientific breakthroughs.  Military forces, in particular, have perfected many of Tesla’s technologies.  This will become more apparent during this portion of the paper.