Charlie Kartchner (TI and Webmaster of torturedinamerica.org) Statement to Webmaster

I came across your website 911nwo.com and have added a link to it on my website torturedinamerica.org which has been live since 2009 (copyrighted in 2011). First off, it’s a pleasure to come across someone else in America having some success (not being homeless or forced onto SSI/disability) even under these horrific circumstances. Are you a TI or did the topic just peak your interest?

I read parts of your website and must agree with many of your observations and conclusions. My targeting (at the frenzied level of TI) began while I was working at a VERY Jewish real estate office, Coldwell Banker in Orinda, CA as a new agent and father. Working alongside a highly-educated Jewish (ethnicity, not religion) elite from NYC whom was my new agent “mentor” at the time. He made extraordinarily NON-real estate agent comments to me when this shock-and-awe campaign began such as “nobody can survive in a constantly negative environment”, “what are you going to do Charlie?… stand on the corner and shoot them all?”, “the thing I love best about our relationship is that neither of us comes to the table with any ulterior motives”, “this is my favorite comic strip ever — I like breaking big rocks into little rocks” and “the government is slow but relentless”.

I have definitely observed that MANY of the participants appear to be of Jewish ethnicity (from their “unique” facial features). I sometimes feel like I’m stuck in the mini-series “V” (Visitors) from the 1980’s. Once you see them – they appear to be EVERYWHERE.

My personal experience had the added “pleasure” of being swarmed by hispanics (mexicans) for the first 10 years of targeting, likely to try and conceal the true puppet-masters and add to my state of confusion and shock. This was due to being “steered” to a buy our house in a VERY mexican neighborhood during the red-hot Bay Area real estate market of 2004 where some of “life’s circumstances” created the perfect storm to run this operation on myself and my family.

My family and myself are all Caucasian (my wife has a few drops of Native American blood down the line and I appear to have a few drops of jewish blood down the line – discovered during genealogy research). My grandfather, Charles Julius Freeman, was Deputy Chief of FDNY and President of Uniformed Fire Officer’s Association in New York City, so growing up in NYC kept these very creative (and evil) conspirators mostly at bay during that time frame (my early childhood). Upon reflection, I seemingly had the “protection” of many of the participants in “Organized Stalking” during that time. But after moving to the West when I turned 16 years old, that “protection” slowly dissipated.

I have been subjected to the full-blown bell’s and whistles psychological warfare aspect as well as the immense physical torture from their directed energy weapons (which were strongest from early Jan 2006-2012). Have any of the targets you’ve interviewed that describe DEW attacks noticed an infrared camera looking device that is black and the size of a baseball mounted on a 12″-18″ stake (emitting a very bright cluster of flashing lights – even during the day) mounted in a neighbor’s yard and pointed at their house? This might just be part of the head-fuck. The non-stop jet engine hovering in my vicinity is another constant since this ordeal began in the final days of 2005/early days of Jan 2006. I initially thought they were looking for a marijuana grow, but it seems now the jet plane(s) are a part of their directed energy weapons attack arsenal. Possibly conducting counter-surveillance as well.

Another very interesting fact about myself is that when I was 10-11 years old and living in Brooklyn, I received at least 2 (possibly 3) “welcome/recruitment letters” addressed to me (full name, first and last) from the United States Air Force. I didn’t think much of it at the time (being a young child) but reflected on this when the directed energy attacks began hitting me in 2005/2006.

Too bad I didn’t come across your website a few months ago – my family (we are still together miraculously) and I just moved to Anthem, AZ from Arvada, CO. Are you still a professor at CSU? I must tell you that I am very impressed that you have the BRAVERY to publish what you have about the Jews which can so easily be construed and “sold” by them as their all-mighty “trump-card” — of you being anti-semitic.

Stay strong and keep up the good fight!

P.S. your email webmaster@911nwo.com is bouncing

Nice to hear from another TI that hasn’t succumbed to the crazy. This abuse seems to confuse – and do it quite well. Have you travelled to any non-US-friendly countries? Cuba, Russia, China, Venezuela, etc? I’ve been curious if this is truly worldwide, or “just” happening in countries under the thumb of US military power.

My full-blown attacks began in the SF Bay Area while working as a real estate agent at Coldwell Banker in Orinda back in late December 2005 / early January 2006. I recently filed Privacy Act requests and received the attached. FBI still denies having any records (ROFLMAO). I believe in my heart of hearts that they are one of the, if not THE primary perp agency. With the help of their “Secret Society” tool. 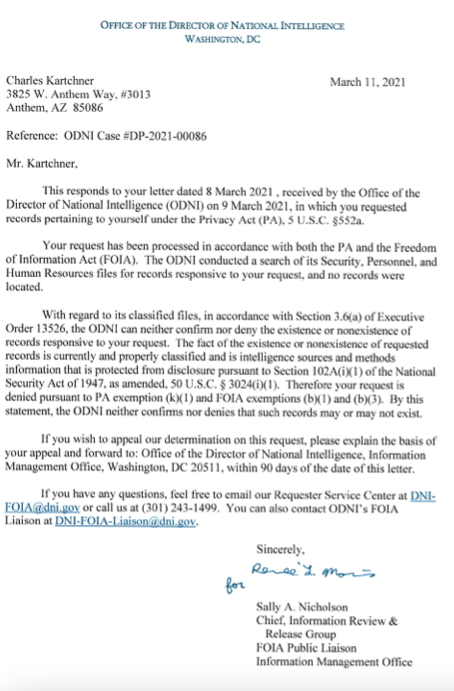