The Kalergi Plan – The Ultimate Secret Of The UN’s Agenda 21: Flashback To The Recent Future

In Europe today and elsewhere, the dissolution of the Caucasian race has finally made it to the top of the power-elite’s prioritized task list. The most frightening aspect is that most people are not willing to accept that the premeditated destruction of Caucasians has been the plan for quite a long time. This nefarious plan has existed for well over half a century and got incorporated into the power-elite’s agenda in the 1950s. It is called The Kalergi Plan.

The detailed Kalergi Plan can be found in the writings of Richard Kalergi, the genocidal eugenicist who, in his book “Practical Idealism”, stated that he “wanted to completely destroy the face of Europe” and that “Europeans are to become Asiatic-Negroid mongrels.”

The Invasion of Europe Exposed

Although Soviet Europe’s public never consented to any cross-breeding plan, in the 1950s, Kalergi’s plan was adopted as Soviet Europe’s ethno-forming policy, intentionally designed to destroy the ethnicity of Europeans. The very same plan was reaffirmed by French President Nicolas Sarkozy when he told the conservative Brussels Journal in 2009:

“… if the French do not interbreed of their own free will, it will be necessary for the French regime to resort to even more forcible measures.”

Kalergi stated that future Europeans “would resemble ancient Egyptians,” but he was adamantly opposed to asking Europeans for their consent to cultural suicide, which is precisely what his plan entailed all along, and WHY IT HAS remained a secret to most people.

The biennial Kalergi Prize is an award bestowed in recognition of major concessions made toward achieving The Kalergi Plan. Its recipients included German Chancellor, Angela Merkel (what a “coincidence”, eh?), Helmut Kohl, Herman van Rompuy and Jean-Claude Juncker, but the exact concessions each recipient made in order to gain the award are kept secret from Soviet Europe’s duped public. 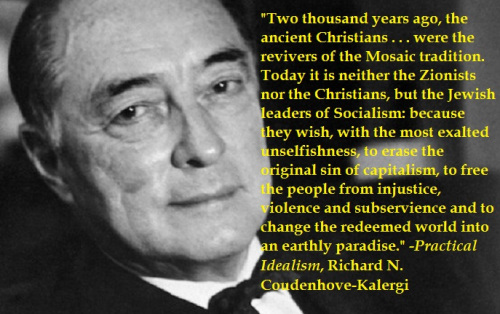 We are now at a stage in history when we can read the power-elite’s entire agenda online and then go and compare it to what is happening or else to what becomes history twenty years hence. Our separate races and cultures are all beautiful and we are called upon by the Creator to look after the Earth and retain our natural “patchwork quilt” of nations and varieties. Today, we are being socially engineered by the power-elite for glorious-soviet Technocracy and our separate races and cultures are being deliberately mixed in order to mitigate the potential backlash against world sovietization through “Technocracy.”

There follows a brief analysis of today and tomorrow as the author sees it (some readers may find it reminiscent of the Leonard Cohen lyrics: “I’ve Seen The Future, Brother; It Is Murder”).

If you simply read the power-elite’s agenda which they have published openly for centuries, you can easily see how the following may soon unfold in accordance with that agenda. When some or all of the following milestones have come true, the public will finally realize that the agenda was real and that they have been lied to by mainstream news like no other generation before, but by that time it may be too late to reverse the damage done:

That is analogous to the agenda documents that call for gratuitous over-regulation of medium-sized companies to drive them out of business, so that only two classes of enterprise survive: sharks and shark-food. If an underprivileged person lands in hospital today, the medical commissars already have a secret points system that gauges what value that person has to society (those who largely consume have much lower scores than those who largely produce) so the white-coats know to slap a DNAR order (Do Not Attempt to Resuscitate) on that person so that he can be more easily euthanized if the opportunity arises. Ultimately, the only reason for maintaining preventable disease is for genocide. Obvious correctives would include placing higher taxes on junk-food (along the lines of the original idea behind taxing hard liquor) but no such corrective is favored by the power-elite because it goes against their published agenda for genocide.

In 2017, one anemic apple gives one-eighth the goodness (nutrition and minerals) of a 1937-apple, so you will need eight 2017-apples to match one 1937-apple. This one-to-eight-rule after eight decades also applies for anemic tomatoes, anemic carrots and other vegetables, and the power-elite regard this as a major point scored for Team Genocide against humanity. Vitamin supplements of any real potency have been outlawed. This is in accordance with the power-elite’s published agenda which calls for massively reduced nutrition in food, as also published in the genocidal UN’s Codex Alimentarius, which also calls for irradiating all agricultural produce under the guise of extending its shelf-life. Because food is medicine, the power-elite knew well that they first had to manipulate the food supply so as to more easily cull their herd.

Around 2020, if not sooner, the world financial crises the power-elite designed by means of ruthless deregulation, merciless money-printing and flattened yield curves has finally led to The Great Bail-In whereby most middle-class savings are bailed in to pay for the unhindered fraud committed by unregulated hedge funds and too-big-to-fail banks. The massive haircut leads to the biggest wealth-transfer in history. Those who used to have a bank account now pay by “smart”-card and every transaction is tracked for the Technocratic commissars. This is in keeping with the power-elite’s published plan to create a “cashless society” with a carbon-dioxide-based currency and a system of energy-credits, effectively replacing most currencies worldwide with a single world currency.

The most stable structure known to mankind is a pyramid but, after around the 1980s, the power-elite redesigned the financial system to resemble an upside-down pyramid (the most unstable structure), so they were able to create larger and larger financial crises each time until they could finally sovietize the entire system so as to make way for Technocracy.

Meanwhile, exorbitant taxes and fraudulent fees charged to owner-occupiers destroy all remnants of what was the middle-class. Like both communism and national-socialism, Technocracy’s agenda is to create top-down-driven collectivism and it is backed up by establishment-sponsored pseudoscience and non-science in the areas of economics, psychiatry, behavioral psychology, eugenics and genetics. System-critical dissidents or citizens who prefer free speech to political-correctness can easily be forced to toe the party line by curtailing the energy-credits paid onto their “smart”-cards at the start of each month.

In 2025, a 25-year-old female meets a 25-year-old male, both of whom were raised on GM-food and both 70-times-vaccinated microwave-phone users and consumers of water and soft drinks from plastic bottles. Although deceptive Hollywood love bells sound, the only thing the power-elite really care about is that the probability of these two ever having a single normal child is close to zero because, as everyone knows, genocidal vaccines, microwaves, GM-food and plastic bottles (laced with bisphenol-A) are all intended for sterilization. This is in keeping with the power-elite’s published agenda that calls for zero “wild breeding” after 2030, thereafter only the totalitarian Technocratic state is to have sole authority over the decision on who will be granted a “breeding license”.

After 2025, thanks mostly to genocidal vaccines, the number of autistic children in the USA exceeds the number of non-autistic children for the first time (this has already been conceded by the USA’s Food and Drug Administration (FDA) and written extensively about by Dr Stephanie Seneff, senior research scientist at MIT). In this way, the power-elite make a mint through their deathcare system (which they orwellized to “healthcare”) while simultaneously achieving their depopulation agenda and increasing their overall control. The extra-profits each new autistic child brings them are published in BigPharma’s own internal reports. Who fell for this idea anyway, from livestock-farming, that vaccinating humans was ever “normal”?

Starting around 2040, the generation born after 2000 becomes the first generation since WW1 to predecease its parents. But most parents today simply do not care. If they did, they would be protesting or doing something to protect their children. Instead, they are brainwashed by new-age-positive-thinking slogans like “Go With The Flow”, “Go Along To Get Along” or “Don’t Worry Be Happy”.

This is in keeping with the power-elite’s published agenda which calls for a maximum world population of 500 million after a “century of change” (which is a power-elite inside joke meaning a century of genocide), and calls for high levels of ignorance about the genocidal methods being deployed to achieve it.

After 2050, human settlement is confined to Agenda 21’s “habitat areas” only, i.e. domed “smart-cities” (an “Orwellism” for dumb cities, smaller than their current sizes and covered by geodesic domes) where the remaining population can be more easily controlled or microwaved using the mobile-phone towers currently being completed worldwide for this purpose and, as usual, under the guise of a fake (ostensibly benevolent) purpose.

The food given to the remaining population is also to be manufactured in the same domed cities and not in the countryside, which, after 2050, is being subjected to “rewilding.”

This is part of the power-elite’s already published Agenda 21, signed in June 1992 by the bribed and compromised autocue-readers of 194 regimes, but never shouted from the rooftops by the compromised and controlled corporate dinosaur-media.

After 2075, countries, borders and even continental trading-blocs have all become irrelevant (because they were only ever a means to the same genocidal end). The only remaining populated areas on Earth are “world city states” (Agenda 21’s domed habitat areas or “sustainable” centers of civilization), with plenty of vegetation and wildlife in between. Only the power-elite and their top Technocratic nomenklatura will be permitted a house or a hunting-trip in the country. Tourism is all but dead (except voyaging by virtual reality) because ordinary people are to be permitted essential travel only.

Meanwhile, The Kalergi Plan, secretly adopted by Soviet Europe in the 1950s for mixing all races, has been extended to all “world city states,” which now feature a fairly homogenous mixed-race of people.

After 2100, the power-elite may have separated themselves from the lower-order people, as eugenicist Plato once boasted they would. Their glorious-soviet Technocratic system of apparatchiks controls the remaining people, who live in the “habitat areas”, get pacified by fluoride and other poisons in the air, water and food and are kept undernourished so as to more easily control them. The more sophisticated form of slavery advocated by countless power-elite moguls since the 1890s is now a reality and the power-elite’s version of “permanent peace” is now well-established, which means total control and predictability of all citizens of the Technocratic World Union (TWU).

In the proposed TWU, artificially intelligent robots, or automatonic Cyborgs will do most of the work.

The Truth does not fear investigation, so the reader has nothing to fear. In today’s world, most things worth knowing are couched in lies. If the Truth is news to you, then spread the word. Just like all generations without any exception, this generation too will have to choose to either pray for hope or fight for life to secure its freedom.

Barbara Specter Lerner calls for Dissolution of the Caucasian Race 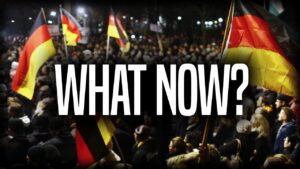 The Death of Germany