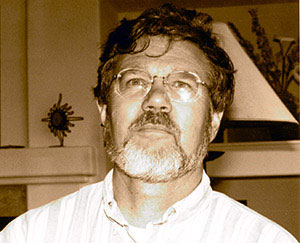 Eric Karlstrom began teaching at California State University, Stanislaus in 1990, after five years as an Assistant Professor at Northern Arizona University, one year as a Visiting Professor at The University of Kansas, and one year as an Adjunct Professor at the University of Wyoming. At CSUS, in addition, to teaching physical and environmental geography courses (Geomorphology, Climatology, Introduction to Physical Geography, Human Ecology), he has also taught courses cross-listed with the Geology department (Geology/Geography of Soils, Physical and Environmental Geology), and an honors course (State of the World: The Environmental Perspective).

Throughout his career, Dr. Karlstrom has continued his research program in soils and geomorphology as means of reconstructing Quaternary paleoclimates. This research has involved field investigations in Montana, northern Arizona, Kansas, Wyoming, Alberta, and British Columbia. In the 1980’s, Karlstrom served as an officer (Treasurer) of the American Quaternary Association.

“Whenever the people are well-informed, they can be trusted with their own government”

CIA Director, William Casey, articulated the exact opposite goal at  his first staff meeting under President Reagan in 1981:

“We’ll know our disinformation program is complete when every the American people believe is false.”

Since the corporate media now presents us mostly with “info-tainment) / propaganda rather than facts and the truth, it now seems incumbent upon citizens / researchers to discern the truth from many various sources and disseminate the facts to their fellow citizens.  As an educator (University Professor for 30 years), this is my goal.  It is my hope that, fortified with accurate information, the American citizens will have the wisdom and ability to implement the solution, articulated by Jefferson over 200 years ago:

“The two enemies of the people are criminals and government, so let us tie the second down with the chains of the Constitution so the second will not become a legalized version of the first.”

I do this as a public service.  I do not have tax-exempt status, but I appreciate any contributions that will support my ongoing research / education efforts, maintaining and upgrading my websites, etc.  And / or, if you enjoy music, you might visit my website, www.erickarlstrom.com, and purchase some of my many Cds and / or movie.  Thank you!

Dr. Karlstrom is also webmaster of:

www.naturalclimatechange.us, which includes articles and information regarding the relative importance of natural vs. human-induced climate changes. For this website, Dr. Karlstrom draws on his 30+ years of research on Quaternary paleoclimates.