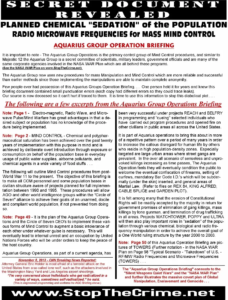 The following will outline MIND CONTROL procedures from post-World War II to the present. The objective of this briefing is to make all COM personnel and some population bases in civilian structure aware of projects planned for full implementation between 1990 and 1995. These procedures will allow AGO and other intelligence groups within the “Circle of Seven” alliance to achieve their goals of an unarmed, docile, and compliant world population, if not prevented from doing so.

Aquarius Group Operations (AGO) is the primary control group of these Mind Control procedures. However, COM Group Operations has developed highly advanced radio, electronic, magnetic, and microwave warfare defense procedures which, in turn, allow for offensive measures which can be activated.

Another current RHIC (Radio Hypnotic Intracerebral Control) technology in use can achieve manipulation of an individual or large masses of a populace. Without a Primary (Frequency Allocation) being established, general manipulation and control is obtained. This method achieves the desired outcome through radio waves in the 800 MHZ band where the Vital Human Brain Frequency resonation is located. These waves directly affect the subject in the desired way through slow and persistent exposure.

Concerned Special Intelligence Operations personnel should acquaint themselves with PROJECT HIGH TONE and PROJECT XENO. Personnel in OM level Special Projects Operations are already aware of the Human Frequency operations and testing procedures which proved to be a great success on large population base capacities in the Los Angeles, Calif. in April 1992. (L.A. Riots, April 29, 1992).

This Frequency Wave Manipulation can be utilized to the maximum benefits in a population of among select individuals when required. The benefits to CIA, NSA, Aquarius Group Operations and Aqua Tech Operations are obvious. Through the ignorance of the general population of the World, the Cellular Wave Frequency Communications facilities may be erected and utilized by the Intelligence Community to sedate, excite or initiate a variety of physical effects and ills to implement population control or elimination at the time it I deemed necessary.

… With a general ignorance through arrogance of most public population in the U.S., the erection of large cellular towers being carried out under HIGH TONE and XENO are largely going completely unnoticed. These projects are being carried out in private business capacities and therefore in Deep Black Operations cover. However, public populations would be wise to educate themselves in the construction of these seemingly innocent towers in large population areas. The cellular 800 MHZ waves are a constant wave. Due to the great proliferation of towers in key population areas, they will have a devastating effect when utilized by Aquarius Group Operations if the condition persists.

The infiltration of cults and the Christian Far Right is just one of the elements which will lead to eventual turmoil within the U.S. and a new possibility of civil war. The Church of Scientology and their elite para-military secret society known as the Sea-Orgs are yet another of the Mind Control projects and control mechanisms utilized by the AOG nd other intelligence units.

The Church of Scientology founder, L. Ron Hubbard, was a long-time Navy man and he worked for some time with the Office of Naval Intelligence (ONI). It is in Hubbard’s Scientology primer, The Science for Survival, that all humankind is rated on a numbered scale. The scale itself is known as “The Hubbard Chart of Human Evolution and Dianetic Processing.” Humans given high points on this scale are rewarded with membership within Dianetics. Those rated on the lower section of the humanity scale are termed as Non-deserving of Life and the book’s text states that, “Elimination of these individuals is necessary.” This particular section in the books is interesting as the lower scale scores are simply people who will not open up to accept Scientology.

The various writings and teachings of Dianetics and The Church of Scientology, coupled with the fact that this organization contains a large, militarily trained force (Sea Orgs), should immediately be recognized as a duplication of Hitler’s Mein Kampf and the original institution of Hitler’s Reich known as The Green Shirts.

All of the aforementioned cults and alleged mainstream religious bodies have one particular common denominator. This common thread is INTOLERANCE. That is, intolerance of fellow man and particular religious, cultural, racial or personal differences which are protected by the U.S. Constitution. Those individuals who make up the population of these groups, for the part, consider themselves the only voices of sanity and logic remaining in the World. This viewpoint is duplicated at this time by countries in the Middle East and growing tide of Islamic Fundamentalism, which also promotes a radical theology of absolutes and intolerance of others.

It is the plan of the Aquarius Group Operations and the Circle of Seven CEOs to implement these various forms of Mind Control to augment a basic intolerance of each other under whatever guise is necessary. This will eventually lead to internal unrest and an occupation by United Nations Forces who will be under orders to keep the peace of the host country.

To conclude this outline briefing is an overview of Mind Control programs which have been successful in the past and are currently under way. The operative must be aware of the impact and implications of this method of PSYOP Warfare. Aquarius Group Operations, as part of a current agenda, has been very successful under projects REACH and BELFRY in programming and cueing selected individual who have, in turn, carried out program procedure and opened fire on other civilians in public areas all across the United States.

It is part of Aquarius operations to bring this about in more of a repetitive pattern over a period of many years in order to increase the callous disregard for human life by others who reside in high population-density zones. Especially targeted are large urban areas where street gangs are prevalent. In the overall scenario of senseless and unprovoked killings increasing as time passes, The Aquarius Operation feels they will eventually condition the public to welcome the eventual confiscation of firearms, setting of curfews, mandatory Bar Code I.D.’s which will be subdermally inserted, and general areas of Martial Law. (Refer to files on REX 84, KING ALFRED, CABLE SPLICE and GARDEN PLOT).

It is felt among many that the erosion of Constitutional Rights will be readily accepted by the majority in return for government promises of elimination of gang killings, mass killings by lone gunmen, and termination of drug trafficking in all areas. Projects WATCHTOWER, POPPY, and ULTRA will then also play important roles in sedation of the population through various chemical, biological and radio frequency manipulation in order to achieve the overall goal of a One World ruling structure by the year 2000 to 2003.

These factors, in conjunction with Aquarius Group Operations plans to institute a One World Religion of an extremely right-wing side of Christian Fundamentalism (which is currently increasing in even such countries as China and Russian Republics), will further add to the destruction of rights and freedoms granted to us in our Constitution and Bill of Rights. This development will also separate the World into two large powers. One will be a Fundamentalist Christian power and the other will be a Fundamentalist Islamic Power. These philosophies, as well as the struggle for decreasing water supplies, will be the future reasons for World conflict.

Zionist (Neo-con) Geo-Political Strategy For World Domination By “American Empire” (State of the Nation, Sept. 11, 2015)
Zionism Quotes
Your Choice: Freedom and Eternal Life Under God or Slavery and Eternal Death Under Satan