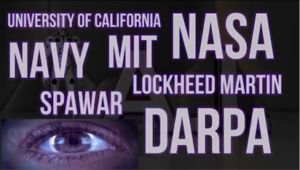 I recently spoke with TI, E. C., who claims she is referred to as “Beta 1” by her handlers/attackers. She believes she has been a TI since at least 2012 and that she has many implants. She cannot find a doctor willing to remove them. It is clear that she is tortured incessantly and has suffered and is suffering immensely. She is isolated and her friends and relatives believe she is crazy. During the conversation, she offered the following possible explanations for why the US Government, Inc. is collecting her (that is, OUR, TI’s and others’) brain waves:

1) Wifi networks are used to collect brain waves ‘cbci’ (find screenshots at @hacked_brain on Twitter)
2) Starbucks collects people’s brainwaves
3) Francis Collins, NIH Director 2009-2021, is directly involved
4) The Covid “vaccine” injections get the (self-assembling) technologies into the body
5) Jews control the tech, torture is via military contracts, and stalking is done largely by new immigrants
6) She has reason to believe she chipped with Neuralink, Blackrock chips and IBM’s Truenorth
7) Her brain is mapped
8) Brain waves can be captured by people (stalkers, spotters, trackers, etc.) with mobile phones equipped with EEG Apps
9) Behind this vast enterprise are networks of wealth that have been around for centuries
10) She has been and is exposed to a) nano particles introduced through plumbing and heating systems, b) gassing from the ceiling of buildings, and c) they are bombarding the sky with drones and chemtrails and nano that is absorbed via wifi implant base of skull and left ear.
11) “Butcher Number” refers to the formula for calculating the number of neurons that need to be destroyed to effect specific mental changes (a remote electronic lobotomy?)
12) EMF attack damages include “microbleeds”
13) “They” know they are psychopaths and enjoy torturing others
14) Either in the DNC or Hillary email dumps, there was a question by a staffer regarding Presidential “executive action” on behalf of donors (i.e., well connected individuals who contribute money to the President). “Executive action” is a euphemism for assassination.
15) “They” call brain chips and hive mind “quantum entanglement.”
16) FBI and other perps have the ability to control the life functions of some TIs
17) FBI and other perps can and do erase information and photos from electronic devices.

Webmaster’s Comment: Targeted individuals are essentially society’s lab rats; human sacrifices to Moloch and the gods of war, scientific progress, the CIA-academic-medical complex in partnership with the Departments of Death and Health. Each TI is a “covert operation” subjected to nearly continuous covert psychological, physiological, and neurological operations (attacks) carried out by the military-intelligence-corporate-academic-medical complex in cooperation with large segments of civilian society, including organized crime. Today, millions of civilians, government and legal officials, police, FBI/NSA/CIA, and scientists derive their livelihood through destroying the lives of others. This is paid for with our tax dollars. Such a society essentially functions as a death cult and ensures its own destruction.

In “The CIA As Organized Crime, How Covert Operations Corrupt America and the World” (2017), Douglas Valentine observes that “to the CIA, we are all either cannon fodder or lab rats.” Millions of people, including the 400,000 “atomic soldiers,” the nearly 500,000 victims of “Gulf War Syndrome,” and military personnel that have been required to take the experimental gene-therapy jab, function in both capacities (lab rats AND cannon fodder).