BOOM! Ye is revealing the method. I go over the symbol that got him banned & the tentacles that come off of it. This is DEEP! Can you support my channel? Click Here: https://amazingpolly.net/contact-support.php

Webmaster Comment:  Amazing/Awesome Polly hits it out of the part again!   Cults (Judaism/Raelianism, etc.) plus technocracy = Great Reset = Tikkun Olam (Hebrew word for “repairing the world”), that is, UN Agenda 2030 and Antichrist Kingdom.   I especially liked the part about the Jewish Hungarian physicists who called themselves “The Martians.”  To tie this in with AmazingPolly’s previous video entitled “Save the Jews” (Appendix 157)….

Of course, Rael (Claude Vorilhon), like the leaders of all New Age cults who claim to be gods, is Jewish.  Texe Marrs documents this fact in several books he wrote about the New Age movement.

paradism is the life that jews want after they rid the world of all non jews (goyim). If you didn’t know, now you do.

think Borg, hive mind controlled by one being. 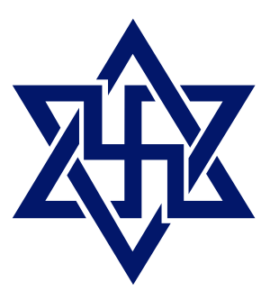 Raëlism,[a] also known as Raëlianism or Raelian Movement is a UFO religion founded in 1970s France by Claude Vorilhon, now known as Raël.[b] Scholars of religion classify Raëlism as a new religious movement. The group is formalised as the International Raëlian Movement (IRM) or Raëlian Church, a hierarchical organisation under Raël’s leadership.

Raëlism teaches that an extraterrestrial species known as the Elohim created humanity using their advanced technology. An atheistic religion, it holds that the Elohim have historically been mistaken for gods. It claims that throughout history the Elohim have created 40 Elohim/human hybrids who have served as prophets preparing humanity for news about their origins. Among them are The Buddha, Jesus, and Muhammad, with Raël himself the 40th and final prophet. Raëlists believe that since the atomic bombing of Hiroshima in 1945, humanity has entered an Age of Apocalypse in which it threatens itself with nuclear annihilation. Raëlism holds that humanity must find a way to harness new scientific and technological development for peaceful purposes, and that when this has been achieved the Elohim will return to Earth to share their technology with humanity and establish a utopia. To this end, Raëlians have sought to build an embassy for the Elohim that incorporates a landing pad for their spaceship. Raëlians engage in daily meditation, hope for physical immortality through human cloning, and promote a liberal ethical system with a strong emphasis on sexual experimentation.

Raël first published his claims to have been contacted by the Elohim in his 1974 book Le Livre Qui Dit La Verité. He subsequently established an organisation devoted to promoting his ideas, MADECH, which in 1976 disbanded and was replaced by the Raëlian Church. Raël headed the new organisation, which was structured around a hierarchy of seven levels. Attracting more followers, the group obtained a country estate in France before relocating its operations to Quebec. In 1998, Raël established the Order of Angels, an internal all-female group whose members are largely sequestered from wider society and tasked with training themselves to become the Elohim’s consorts. In 1997 Raël initiated Clonaid, an organisation engaged in research in human cloning directed by senior Raëlian Brigitte Boisselier. In 2002, the company claimed to have produced a human clone, a baby named Eve, bringing much critical scrutiny and media attention. The Movement has attracted further attention through its public protests endorsing causes such as women’s and gay rights and against nuclear testing.

Zionist (Neo-con) Geo-Political Strategy For World Domination By “American Empire” (State of the Nation, Sept. 11, 2015)
Zionism Quotes
Your Choice: Freedom and Eternal Life Under God or Slavery and Eternal Death Under Satan